move!plx® is an aqueous lemon verbena extract containing phenylpropanoids that accelerate exercise recovery in athletes by reducing the risk of muscle soreness and injury and enhancing joint mobility.

move!plx® is also beneficial for sleep, mood and stress.

move!plx® is available in France and in Benelux countries.

move!plx® is an aqueous extract of lemon verbena (Aloysia citrodoria Palau) leaves and is manufactured in Spain. It contains phenylpropanoids such as verbascosides and flavonoids such as luteolin.

move!plx® was developed by Monteloeder in collaboration with the Institute of Molecular and Cellular Biology at the Miguel Hernandez University in Spain. 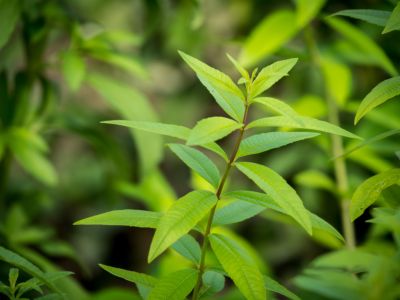 In addition, this study also showed a direct correlation between the anti-oxidative activity of the lemon verbena extract and the concentration in verbascosides (major bioactive ingredient in the extract).

Acute toxicity was assessed by administering an oral dose of 2000 mg/kg of lemon verbena extract to a test group of rats and results were compared with a control group, that did not receive any extract. No unwanted effects were observed after 15 days. Thus, move!plx® shows no toxicity below a massive dose of 2000 mg/kg.

move!plx® is a lemon verbena extract that contains phenylpropanoids with many benefits on:

Of the two pre-clinical and six clinical studies that provide evidence for the health benefits of move!plx®, four are presented here. The first three studies involve physiological markers of exercise recovery, one of which also includes assays of muscle soreness, sleep and mood. The fourth study addresses joint pain.

The protocol of the first three studies was identical. Two groups of students in Sports and Exercise Science at the Miguel Hernandez University in Spain underwent a physical training program consisting of a 90 min run (14.5 to 16.5 km) every other day for three weeks. One group received a supplement with a dose of 1200 mg of move!plx® at 10% verbascosides and the other group (control) received a placebo. The markers of anti-oxidative status, muscle soreness and inflammation were quantified and their differences were tested using an analysis of variance (ANOVA). The third study also studied psychological parameters such as mood.

In the first study, Carrera-Quintanar et al. (2010) investigated the anti-oxidative capacity of move!plx® on the oxidative status of plasma and blood cells (erythrocytes and lymphocytes) in 15 students who exercised three days a week (90 min, 14.5 to 16.5 km run) for three weeks. Following a randomized, double-blind protocol, eight students received a daily dose of 1200 mg of move!plx® (titered at 10% verbascosides) and seven students received a placebo. A two-way ANOVA on the factors “group” and “time” was used to test the differences between groups and between the beginning and the end of supplementation.

Blood samples were taken at 0 and 21 days and showed a significant decrease (p<0.05) in the markers associated with oxidative stress such as malondialdehyde (MDA) and protein carbonyls in the plasma.

According to this study, there was a significant difference in the concentration in MDA and protein carbonyls in the plasma between the group that received move!plx® and the group that did not after a 21 day training program, as illustrated in the figures below. 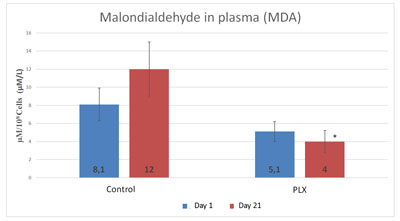 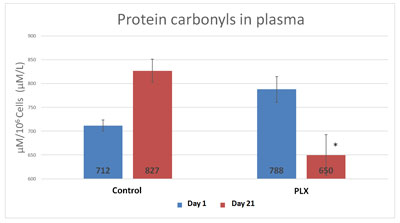 Likewise, in the second study (Funes et al., 2010) that measured the influence of move!plx® supplementation on the anti-oxidative response of neutrophils, markers associated with muscle damage and the cytokine profile of 15 students who followed a thrice weekly training program of 90 min consisting of a 14.5 to 16.5 km run for three weeks. In the randomized, double-blind protocol, eight students received a daily dose of 1200 mg of move!plx® (titered at 10% verbascosides) and seven students received a placebo.

MDA and protein carbonyls are makers of oxidative stress due to intensive exercise. They are the derivatives of the peroxidation of lipids and proteins that can compromise the proper functioning of leukocytes (chemotaxis, phagocytosis, etc.).

MDA and protein carbonyls in neutrophils

Using a randomized, double-blind protocol, eight students received a daily dose of 1200 mg of move!plx® (titered at 10% verbascosides) and seven students received a placebo. All followed the same training program with a 90 min run (14.5 to 16.5 km) every other day for three weeks.

Protein carbonyls and MDA were analyzed in the blood plasma, lymphocytes and neutrophils. In this study, only the activity of protein carbonyls in the plasma was significantly different (p<0.05) between the two groups. 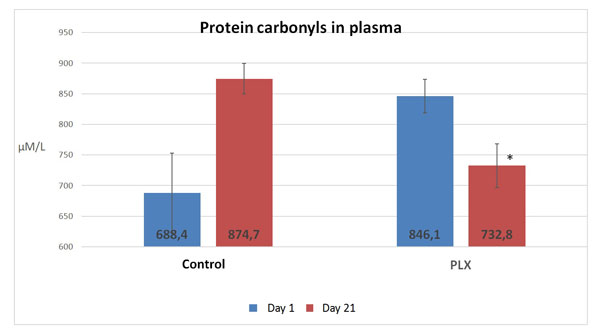 In conclusion, move!plx® has a clear effect on oxidative stress markers and this effect was observed in all three clinical studies.

In the first study (Carrera-Quintanar et al., 2010), the three-week training program led to a significant increase in catalase, GSH reductase, GSH peroxidase and superoxide dismutase (SOD) in both groups. However, the activity of catalase and GSH reductase in the lymphocytes was significantly higher in the group that received move!plx® supplementation after exercising. 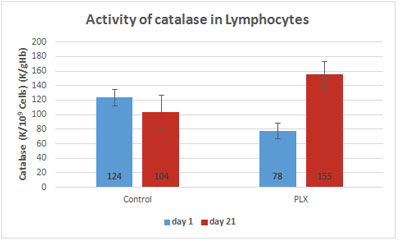 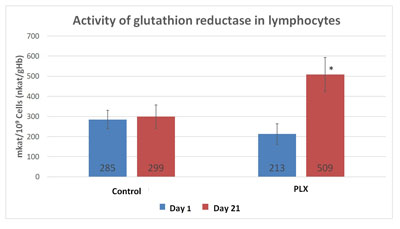 Given the importance of GSH-reductase in regenerating glutathione, the expression of the gene coding for glutathione reductase was measured in two groups using qRT-PCR, a technique for quantifying DNA. There were no differences in mRNA levels between the two groups, suggesting that regulation occurs at the protein level.

To better understand the changes observed in lymphocytes, the same enzymatic activities were measured in erythrocytes, cells without nuclei and thus whose regulation is not controlled by genes. As in the lymphocytes, the activity of GSH reductase strongly increased in the erythrocytes of the group that received move!plx® supplementation, again supporting the hypothesis that move!plx® regulates GSH reductase. 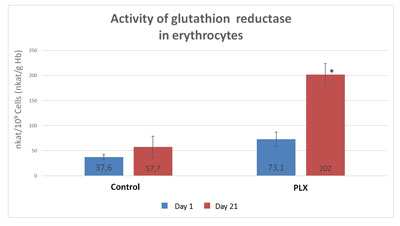 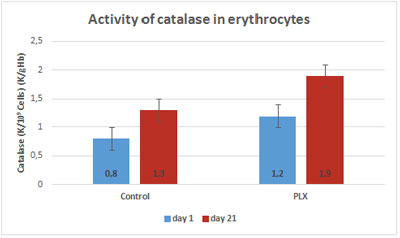 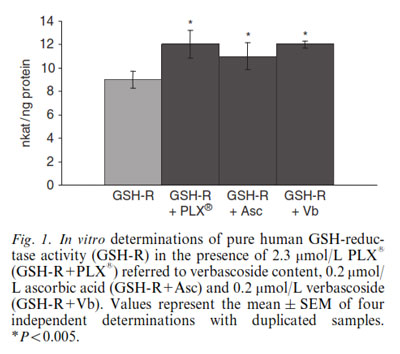 Another study (Funes et al., 2010) measured glutathione reductase activity in neutrophils, which increased more in the supplemented group than in the control group. Again, this increase was not due to an increase in gene expression, suggesting that this activation acts at the post-transcriptional level. 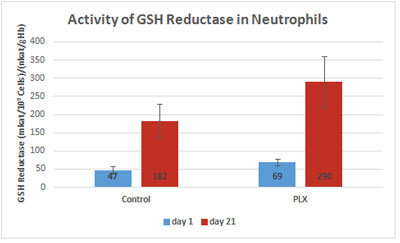 In the Funes et al. (2010) study described above, there was a significant inhibitory effect (p<0.05) on myeloperoxidase (MPO) activity — a marker associated with inflammation— in the move!plx®-supplemented group compared with the control group. Several studies have shown that physical exercise favors the activation of MPO (enzyme that triggers the production of hypochlorous acid (HOCl), a powerful oxidant and early marker of inflammation) in neutrophils that can lead to excessive production of free radicals. 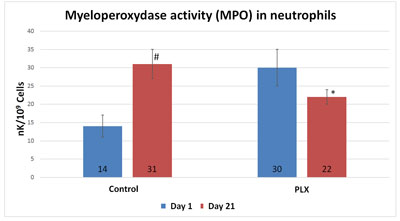 Another study also demonstrated the protective effect of move!plx® on neutrophils against oxidative stress and inflammation caused by exercise.

Moreover, the anti-inflammatory effect of move!plx® was assessed on cultured blood samples stimulated with a lipopolysaccharide (LPS), a pro-inflammatory molecule. Before and after the 21 day exercise program, concentrations of IL6, IL1B and TNF-alpha were assayed using an ELISA test. 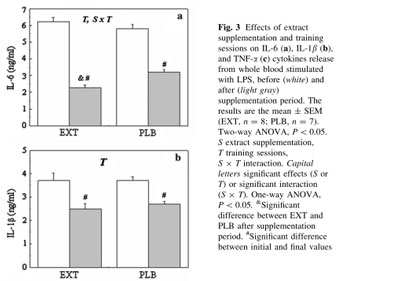 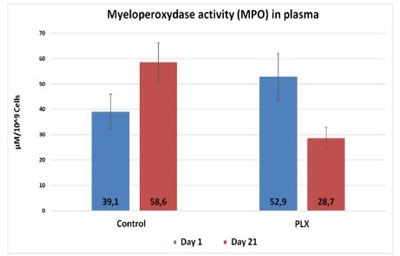 There is promising evidence that move!plx® has an effect on the markers of inflammation.

Reduction in markers of muscle damage 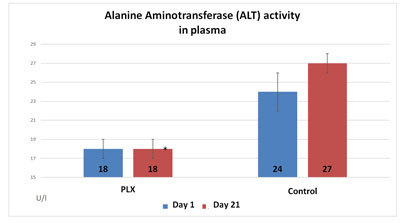 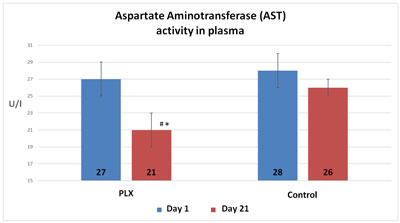 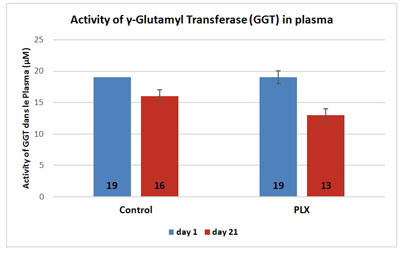 Thus, stability or decrease in aminotransferase activity indicates that move!plx® has a protective effect on muscle tissue.

In the third study, the group that received move!plx® supplementation showed plasma values that were significantly lower in aspartate aminotransferase and glutamic pyruvic transaminase than the control group. Similarly, the move!plx®-treated group showed plasma myoglobin (Mb) levels that were significantly lower (p<0.05) than in the control group. These results tend to show that move!plx® reduces the renewal of muscle tissue following exercise.

In conclusion, move!plx® seems to significantly reduce the markers of muscle damage due to intensive physical exercise. 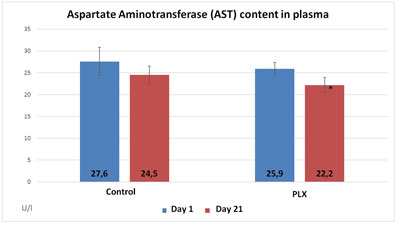 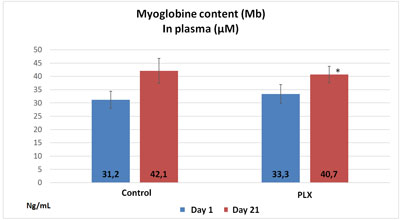 Improvement of psychological parameters of sleep and mood

To evaluate the effect of  move!plx® on exercise recovery, although it is necessary to measure biochemical parameters, psychological parameters are useful to obtain a full picture of the physical and mental state of athletes that consume  move!plx® compared with the control group.

A Profile of Mood States (POMS) questionnaire administered in the third study assesses the emotional state of the participants through answers to questions on feelings of tension, depression, anger, vigor, fatigue and confusion and their sub-profiles. It was administered at the end of the three-week study. A five-item questionnaire on sleep duration and quality was administered every morning upon waking. Soreness was also recorded by participants. 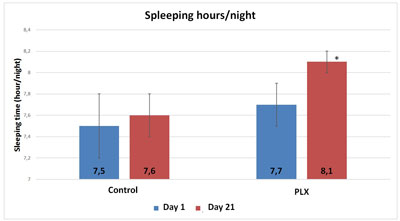 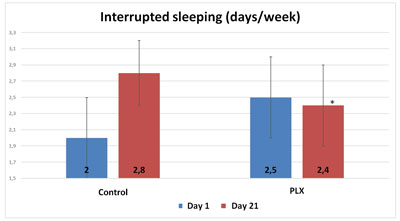 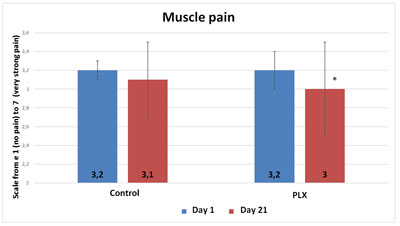 Also, although the total score of the POMS questionnaire did not show any significant differences between the two groups, three specific “mood profiles” of the questionnaire showed results that were significantly improved in the group that received move!plx® supplements. The mood profiles that showed differences involve anxiety, anger and fatigue. 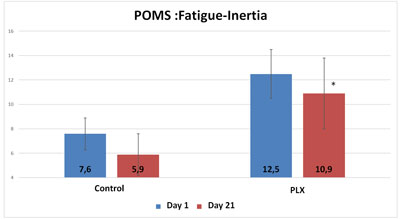 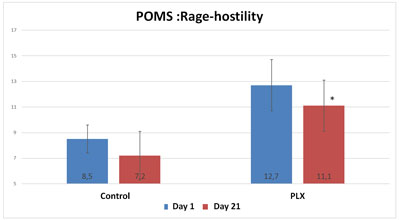 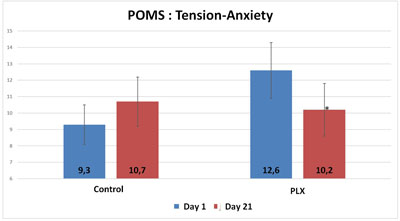 move!plx® is thus beneficial for sleep and mood.

The fourth clinical study addressed joint mobility (Cartula et al., 2011). This controlled, randomized, double-blind study was carried out with a mixture of PLX® and omega-3 fatty acids.  The number of participants was 12 in the placebo group (22 initially) and 19 in the PLX® group (23 initially).  The administered dose was 230 mg at 14% verbascosides and 83.25 mg EPA/DHA (10/8) for 5 weeks, after which the dose was halved for 4 weeks. Participants filled out WOMAC and Lequesne questionnaires at the beginning of the study and then once a week.

The Western Ontario MacMaster (WOMAC) questionnaire is a validated index  that assesses osteoarthritis in the lower limbs, as follows:

The Lequesne questionnaire is also called the Index of Severity for Osteoarthritis (1987) and assesses hip and knee osteoarthritis.

The figure below shows the changes that occurred over 9 weeks in the Lequesne index, with the same pattern. There was a progressively stronger and significant decrease in the supplemented group compared with the control group. (Statistical analysis * p<0.05 **p<0.01). 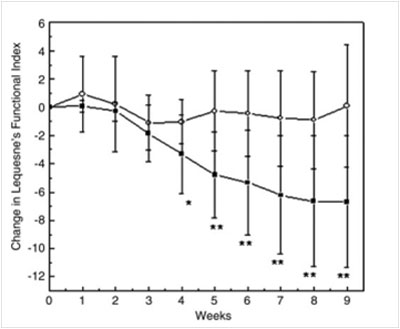 Thus, PLX is beneficial for the well being of people and especially sportsmen.

Given the length of the study (9 weeks), this effect may explain the high rate of desertion of volunteers in the placebo group who did not notice any beneficial effects.

Aloysia citrodora Palau is also listed in the “Novel Food Catalogue” under the names of Lippia triphylla or Lippia citrodora and is authorized in food and drink.

move!plx® is available as a water-soluble brown powder and benefits from two-year use date in its original packaging. 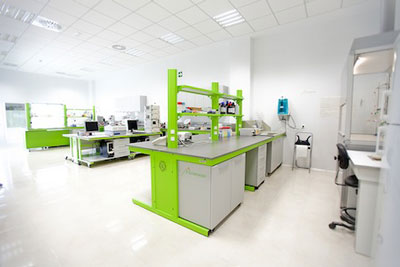 The only health claims that can be used for move!plx® are “health claims on plant-derived substances awaiting assessment” that specifically include lemon verbena.

There is 2 health claims “on hold” on the relaxing effect of move!plx® and physical well-being and joints. 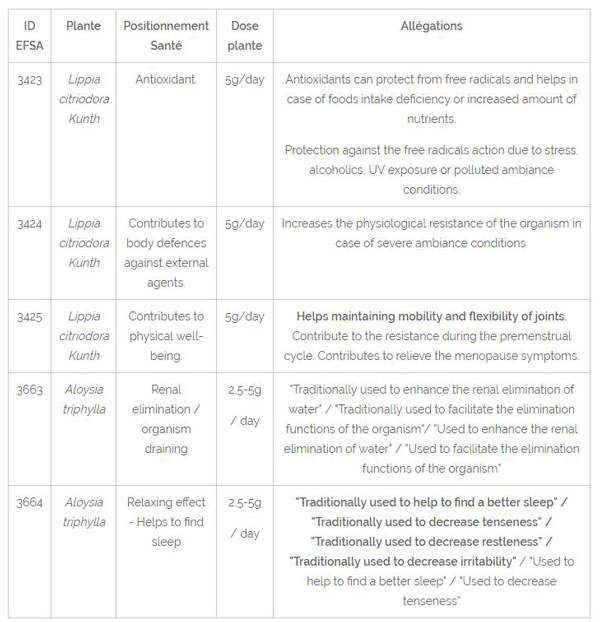