Collavant n2 is an innovative and natural-origin health ingredient recognized as a source of native type II collagen. Collagen plays a role in strengthening cartilage, where it is the main structural protein.

Native type II collagen – also known as undenatured or non-hydrolysed collagen – has a unique mechanism of action : oral tolerance, which can help modulate the immune response against endogenous type II collagen, thereby protecting it from degradation.

Collavant n2 is available in France.

=> This content is intended exclusively for professionals (food supplement laboratories and processors).

Collavant n2 is an innovative health ingredient extracted from chicken sternum cartilage. The manufacturing process of Collavant n2 is standardised, providing a minimum of 25% collagen, including 4% native type II collagen.

In addition to type II collagen, Collavant n2 also contains other compounds such as glycosaminoglycans (GAGs). These macromolecules make up the matrix of connective tissue and ensure the structure and elasticity of most cartilage, skin and tendons.

The tropocollagen units bind together to form a collagen fibril, which is roughly 50 nm in diameter. Assembled fibrils form collagen fibers.

Cartilage is a connective tissue covering the ends of bones. It is composed of chondrocytes, collagen and a basic fundamental substance called SFA. This substance is itself composed of proteoglycans and GAGs (chondroitin sulfate and keratan sulfate especially). Cartilage protects and maintains bone structures during movement. The coupled action of collagen and SFA limits bone on bone friction and increases the resistance of joints to high mechanical forces.

In the joints, cartilage is said to be hyaline – in other words, it is full of type II collagen fibers. These are arranged singularly in a special mesh-like network (Thiry et al., 2020). Its composition makes it very elastic and resistant, giving it an important structural role (Shoulders et al., 2009).

Cartilage tissues do not have blood vessels ; its cells receive nutrition by diffusion from the synovial fluid in the joint cavity. For this reason, the natural generation of cartilage is slow and often incomplete.

During physical exercise, or simply because of the daily movements, lesions can appear in the cartilage, fragmenting collagen fibers and disrupting their structure. Cartilage then becomes fragile, losing its resistance and viscoelastic properties.

The immune system plays a role in cartilage degradation. Due to the erosion of cartilage or to the presence of lesions, joint cartilage degradation products are released into the extracellular matrix of the joint. The immune system, and more specifically T lymphocytes, do not recognize these endogenous collagen fragments, and therefore categorize them as potentially harmful (Kandahari et al., 2015). Thus, the immune cells, which now consider collagen to be undesirable, will aggravate the fragility of the cartilage and increase inflammation. The inflammatory reaction generates joint pain and can cause an unusually high secretion of synovial fluid, resulting in an effusion.

Many people find themselves confronted with joint pain like this. This is why Elementa offers Collavant n2, an effective solution for promoting joint health with its mechanism of action that acts on the immune-mediated aspect of joint conditions.

Collavant n2 owes its effect to the native type II collagen it contains, through a mechanism of immune mediation called oral tolerance.

This mechanism of action involves administering an antigen that can modulate the immune response as a positive reaction. 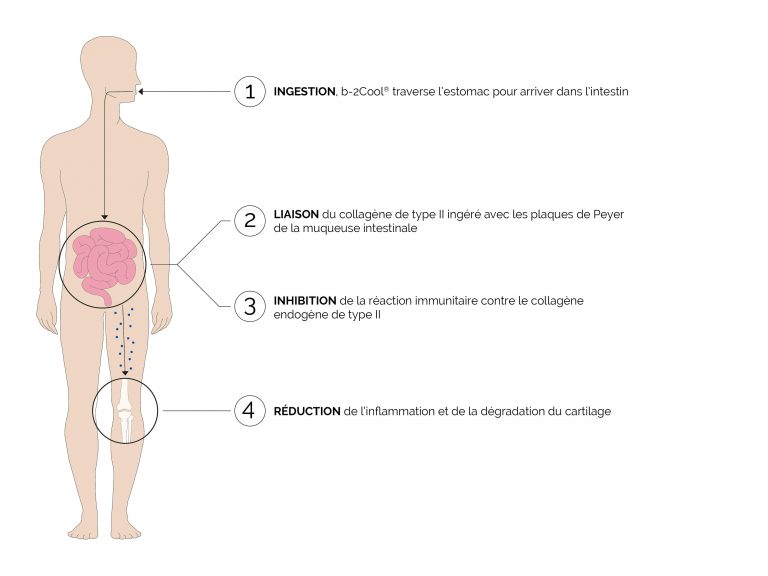 Figure 2 : Functional diagram of the mechanism of action of Collavant n2 by the oral tolerance principle

Taken orally, native collagen passes into the stomach without being denaturated (1). In the intestines, it is recognised by Peyer patches, lymphoid follicles that regulate the immune response (2). Thanks to its specific epitopes, collagen interacts with the immune cells (3), triggering the down regulation of the inflammatory process through an immune mediator. Since lymphocytes no longer act on the type II collagen present in joints (4) (Park et al., 2009), the organism then learns to recognize it as a non-harmful molecule.

With this mechanism of action, Collavant n2 plays a beneficial role in joint health, and its effect have been demonstrated in 3 clinical trials.

Many people are confronted with age-related issues and joint pain, due to joint tissue degradation, arising from aging, sport practice, being overweight, having a sedentary lifestyle or diseases such as osteoarthritis or rheumatoid arthritis.

Collavant n2 is an innovative solution for joint health and has been the subject of relevant clinical trials. The effectiveness of Collavant n2 inrelieving joint pain, reducing inflammation and preventing cartilage destruction has been demonstrated in a pre-clinical study on an arthritis animal model (Mannelli et al., 2015), as well as in two clinical studies in arthritis patients: one retrospective (Scarpellini et al., 2008) and the other single-blind (Bakilan et al., 2016).

This study assessed the pre-clinical effectiveness of a low dose of chicken type II collagen in rats with monosodium iodoacetate (MIA)-induced arthritis. Often related to age, osteoarthritis affects the joints and is accompanied by inflammation, pain and stiffness.

The study was carried out on four groups of rats for 14 days :

Various tests and measurements were used to quantify the progression of arthritis in the groups of rats :

In this study, it has been shown that Collavant n2 reduced joint pain after 7 and 14 days of treatment. Indeed, the collagen-treated rats showed significantly reduced (p<0,01) sensitivity to pain upon mechanical pressure applied to the paw, compared to the negative control group.

As shown in figure 1, the pressure tolerated in the affected paw of rats treated with 3mg/kg Collavant n2 is significantly higher than in the untreated control group (p<0,01) on day 14. 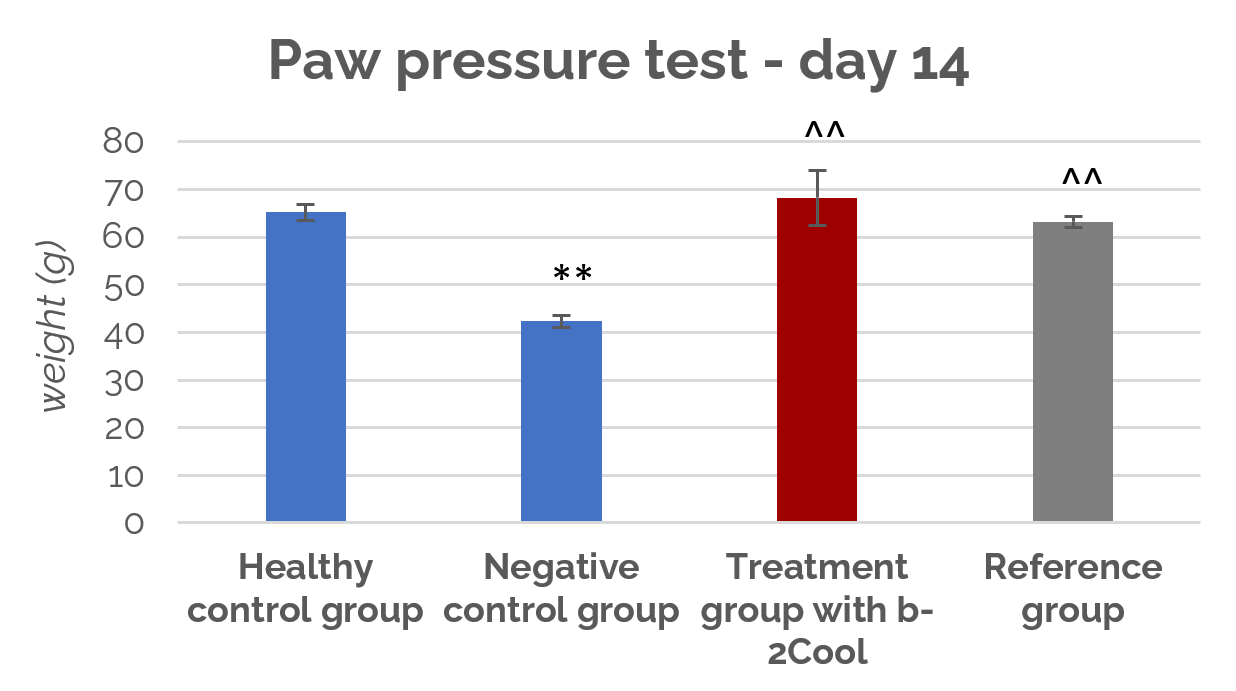 The « Animex » test corroborates  these results and demonstrates that daily supplementation with Collavant n2 improved motor activity, coordination and balance.

Thus, at very low doses, Collavant n2 supports joint health and its effectiveness is comparable to that of pharmaceutical grade glucosamine used at much higher dose.

DECREASE OF THE INFLAMMATORY RESPONSE

The Collavant n2 treatment is not only associated with behavioural improvements but also with an improvement in biochemical markers.

Figure 2 shows that on the 14th day, Collavant n2 significantly reduced the disease-induced increase in plasma IL-1β and TNFα levels (p<0,01) with respect to the untreated group. These results were similar to the effects of glucosamine. 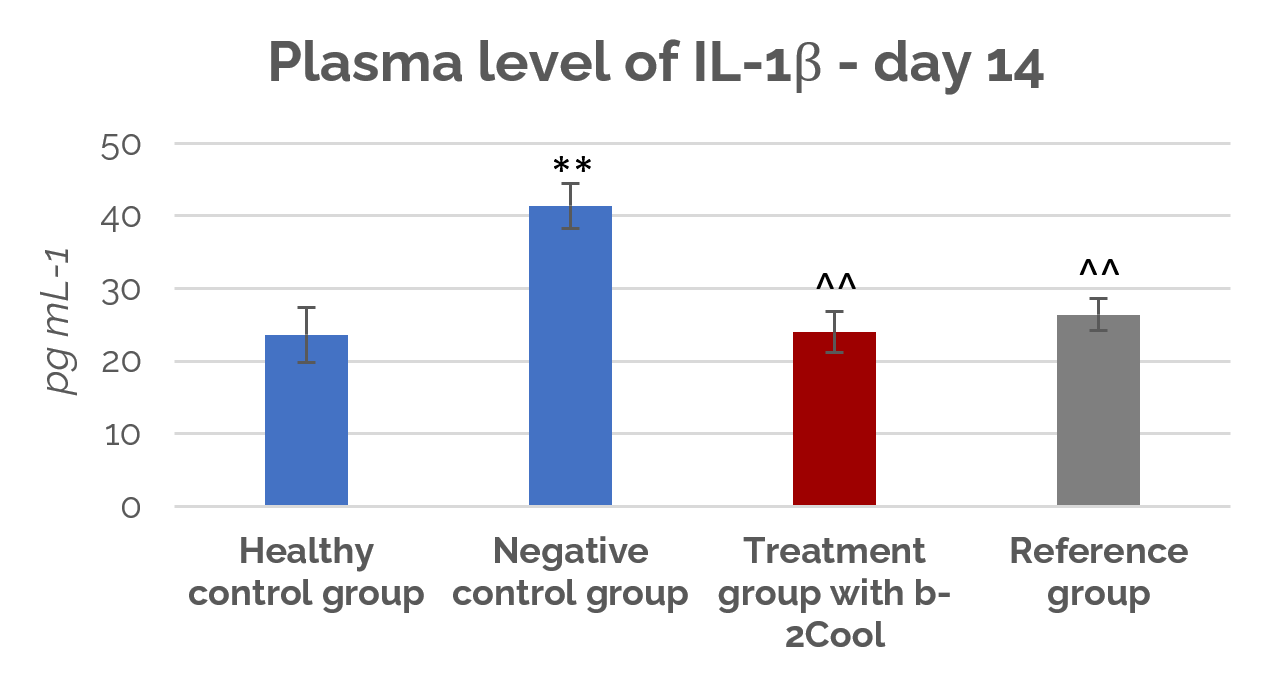 In conclusion, this study helped to shed light on the positive effects of the supplementation with Collavant n2 in supporting joint health.

The aim of the Scarpellini et al. (2008) study was to assess the effect of Collavant n2 (native type II collagen) in combination with glucosamine and chondroitin sulphate, two ingredients known for their positive effect on joint. This comparative retrospective study followed 104 patients (average age 61.4 years) with osteoarthritis in the hips, knees, hands or erosive hand osteoarthritis (a severe form of arthritis).

They were divided into two groups :

Various test and evaluation procedure were carried out on the patients at the beginning of the experiment (T0), after 6 months (T6) and after 12 months (T12):

EFFETS of GLUCOSAMINE, CHONDROITIN AND Collavant n2 ON OSTEOARTHRITIS

These results showed a decrease in cartilage degradation and pain after only six months. 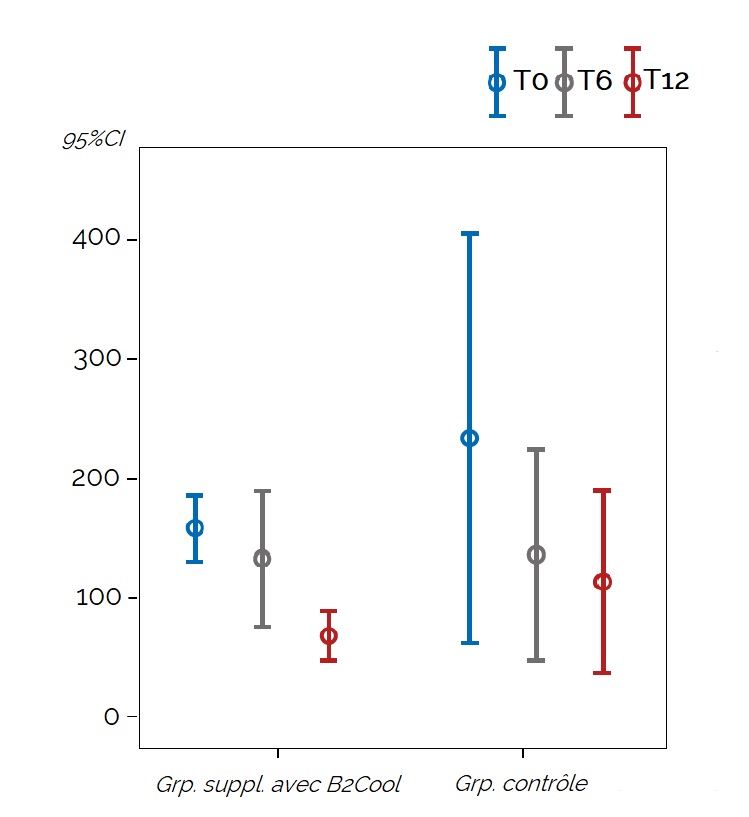 Figure 3 : Change in the mean uCTX-I concentrations in patients with erosive hand osteoarthritis overtime for the groupe that received the Collavant n2-containing supplements and the control groupe ( 95% CI: 95% confidence interval).

The addition of Collavant n2 decreased the collagen fragments generated during cartilage degradation (mean levels of the uCTX-I and uCTX-II markers) compared with the control group, particularly in people with hand osteoarthritis. Therefore, the combination with Collavant n2 appears to reduce the degradation of collagen more than glucosamine and chondroitin alone.

In parallel, figure 4 shows decreased progression in the Kellgren-Lawrence scale that assesses the severity of osteoarthritis. At 12 months, the Collavant n2 group shows a significantly slower increase in their Kellgren-Lawrence score (p=0.009) than the control group. Therefore, this result suggests that adding Collavant n2 helps slowdown the structural progression of osteoarthritis. 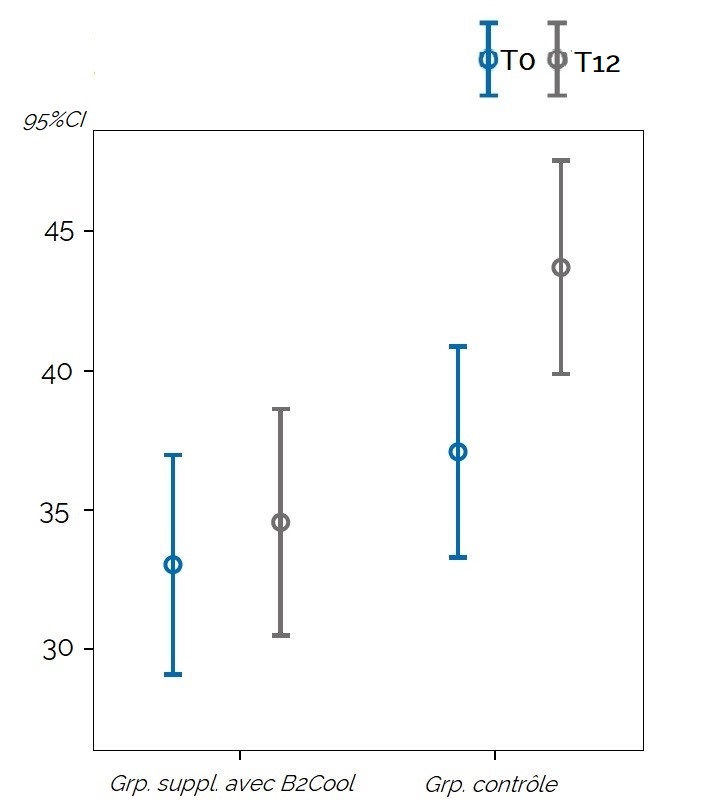 Figure 4 : Change overtime in the Kellgren-Lawrence score in erosive hand arthrisis patients for the group supplemented with Collavant n2 and the control group (95% CI: 95% confidence interval)

To conclude, the study’s results showed the effectiveness of Collavant n2 supplementation in reducing collagen degradation and slowing down osteoarthritis progression.

Bakilan et al. (2016) clinical study assessed the effect of Collavant n2 supplementation on knee osteoarthritis. This randomised single-blind controlled clinical study evaluated the efficacy of Collavant n2 during a 3 months treatment.The 39 participating patients, aged from 45 to 70 years and all suffering from knee arthritis, were divided into two groups:

Various tests and measurements were carried out on the patients in the pre-treatment (t0) and post-treatment phase (t3):

After 3 months of treatment, patients in the Collavant n2 supplemented group reported significant improvements compared to t0 regarding pain, function and quality of life:

At the end of the 3 months of treatment, there was a significant difference in the VAS walking score in favour of the Collavant n2 supplemented group compared to the control group (p=0,014). A 50% reduction in pain was recorded in the group supplemented with Collavant n2 and paracetamol (p=0.002).

To conclude, supplementation with native type II collagen (Collavant n2) combined with an analgesic would therefore reduce joint pain, improve mobility and quality of life after 3 months of treatment in people with knee osteoarthritis. Moreover, Collavant n2 supplementation would have a superior effect to paracetamol alone in reducing joint pain during walking.

Collagen is a general use food ingredient included in Annex III, Section XV of Regulation n°853/2004 laying down specific hygiene rules for food of animal origin.

As there is history of collagen use in foods prior to May 15th, 1997, Regulation (UE) n°2015/2283 regarding novel foods does not apply. Thus, Collavant n2 can be used as an ingredient added to foods or included in food supplements formulations.

Collagen is authorised in France in food supplements by mutual recognition (Article 16).

Collavant n2 is an ingredient that undergoes a thorough process control at Bioiberica. Once extracted from the chicken sternum, the product follows a strictly controlled manufacturing process to obtain a fine, cream-coloured, odourless powder.

Collavant n2 is mainly used in the formulation of food supplements in powder, tablet and capsule form.

According to the studies conducted by Bioiberica, the recommended daily dose is 40 mg. This dose is 250 times lower than the amount typically used for hydrolysed collagen (10 g/day). This considerably lower dose greatly facilitates formulation in compact formats.

Collavant n2 can be associated with vitamin C, vitamin D and certain minerals (copper, manganese, zinc, magnesium) ensuring the good functioning of mechanisms underlying joint functioning and/or participating in the formation of collagen.

These statements have not been evaluated by competent food authorities. This information is only for business-to-business use. The product is not intended to diagnose, treat, cure, or prevent any disease.

These statements are not meant to be addressed to final consumers and therefore, BIOIBERICA and ELEMENTA assume no liability for the statements that the producer of the final product may include in its own publicity to consumers.