Anthocyan® has powerful anti-oxidant and anti-inflammatory properties, conferring it anti-age and protective effects against chronic age- or diet-related diseases. Anthocyan® is particularly beneficial for eye function.

Anthocyan® is available in France, Spain and the Benelux countries.

A concentration range from 25% to 40% is available.

Anthocyanins are polyphenols with high antioxidant activity. Anthocyanins, found naturally in fruits and vegetables, are plant secondary metabolites belonging to the class of flavonoid compounds. 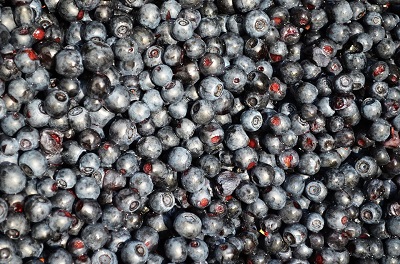 The independent Brunswik Laboratory database gives the reference values for various fruits and vegetables according to the oxygen radical absorbance capacity (ORAC) test. The ORAC index gives an estimate of the antioxidant capacity of a food based on the oxidative degradation of a fluorescent molecule due to the transfer of hydrogen atoms to free radicals.

Figure 1 shows that the ORAC values for bilberries are nearly double that of wild blueberries and are around 1.6 times higher. 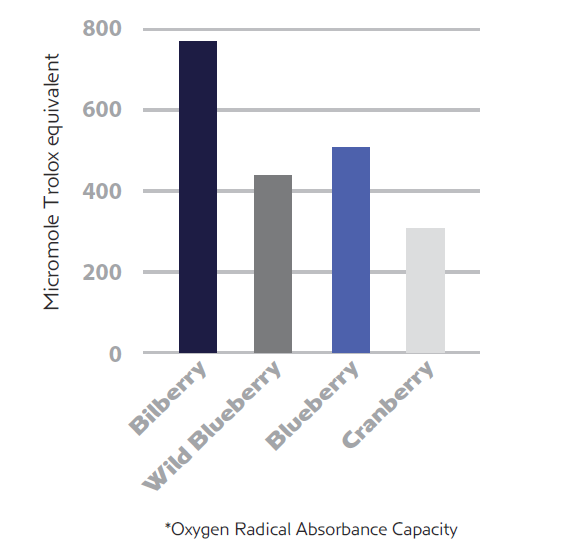 The ferric reducing ability of plasma (FRAP) index measures the antioxidant potential of plasma based on its reduction of ferric ions.

The figure below shows FRAP values 3 and 6 h after meals in the supplemented group and in the control group. There is a significant improvement in the antioxidant capacity of the group fed bilberry extracts compared with the control group (p<0001). 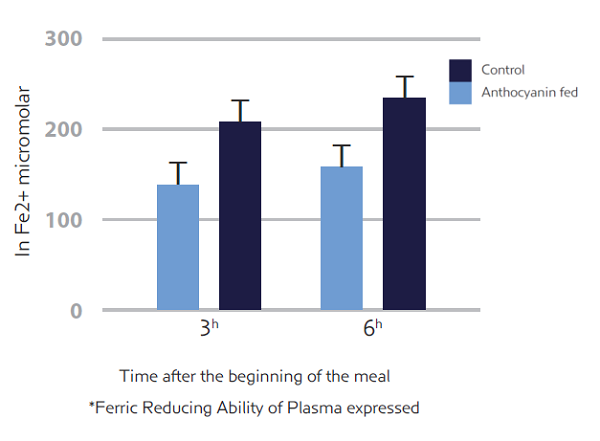 Anthocyan® is a powerful antioxidant, helping to preserve human health

Various studies have shown that anthocyanin-rich bilberry extracts can have a beneficial effect for eyes, particularly with regard to protection against UV rays and eye fatigue.

The Aly et al. (2014) placebo-controlled study carried out on an animal model (rat) evaluated the effects of UVB rays on eye damage and the impact of bilberry extract supplementation.

DNA damage in the lens was measured by electrophoresis (comet assay) of lens epithelial cells, as well as the concentration in oxidative enzymes (MDA) and antioxidant enzymes (SOD, GSH-Px and CAT).

Bilberry extracts have a protective effect with regard to UVB rays.

Similarly, there is a significant decrease in MDA levels and, to a lesser degree, in SOD enzymes in the UVB-exposed group that received bilberry extracts compared with the control UVB-exposed group.

In conclusion, taking 320 mg bilberry extract for 15 days in rats helps protect eye lenses against UVB rays. The consumption of bilberry extract limits the degradation of lens epithelial cells and their DNA by improving the antioxidant defense mechanisms that are inherent to these cells.

At 4 and 8 weeks, there was a significant decrease (compared to 0 weeks and the placebo group) in various ophthalmological parameters linked to visual fatigue, including: eye fatigue, eye pain, dry eyes, heaviness in the eye area (only compared with placebo after 8 weeks), double vision and discomfort.

Anthocyan can thus has an effect on eye fatigue

Talavera, Bioavailability of a bilberry anthocyanin extract and its impact on plasma antioxidant capacity in rats. 2006, J Sci. Food Agric, 86:90-97.

Anthocyane® is authorized in France for food supplements.

In France, Vaccinium myrtillus is listed in Annex I of the French “Plants” decree of 24 June 2014 establishing the list of plants authorized in food supplements and the conditions of their employment (authorized plant parts: fruit, leaves).

In Belgium, Vaccinium myrtillus is listed in the Belgian Royal Decree of 29 August 1997 on plants on the  manufacture and marketing of foodstuffs constituted or consisting of plants or plant preparations of (authorized plant part: fruit).

The standardized extract is also described in the European Pharmacopeia.

Anthocyanins are blue pigments and are also defined as food colorants (E163) according to Regulation (EU) no. 1333 2008 on food additives. 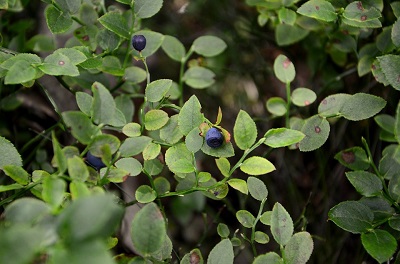 A wide range of concentrations are available: from 25 to 40% anthocyanins.

Anthocyanin is water soluble. It can also be encapsulated with maltodextrin or gum arabic matrices.

Based on their own studies and on the literature, Frelux recommends a daily dose of 70-120 mg anthocyanins. 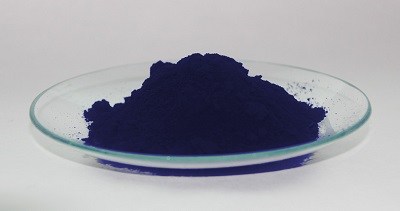 “Bilberry is rich in the antioxidants anthocyanidins” ( ID 2854, bilberry extract )

“Antioxidants can protect from free radicals and helps in case of foods intake deficiency or increased amount of nutrients. “( ID 3706, bilberry extract )

There are also allegations on intestinal health.